Does the headline seem melodramatic? Then let’s take a look at the UK and USA statistics in relation to some of the life-threatening diseases linked to obesity that can lead to premature death. 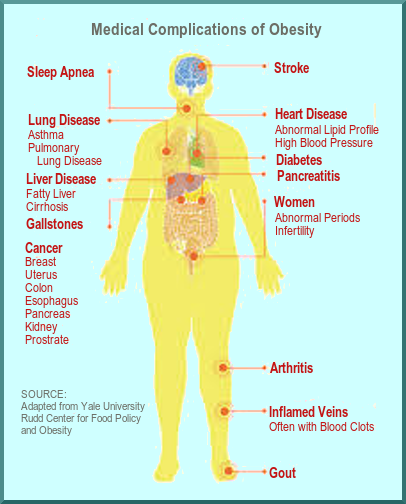 Throughout the western hemisphere, governments and the WHO are deeply concerned that obesity is reaching epidemic proportions with ever rising numbers of people suffering from obesity, even in countries where obesity was never a major problem.

In the UK, the figures for excess weight and obesity are frightening with one in every eleven deaths being directly attributed to excess weight – and it’s gradually getting worse.

Currently it is estimated that just under half the adult male and around a third of the adult female population are overweight and of these, one in four, or around 12.5 million, are classed as being obese with a BMI of thirty plus.

If this trend continues it is estimated that, by the year 2030, there will be around twenty-five million adults suffering from obesity, and this doesn’t take into account child obesity.

Unless the trend in rising excess weight is reversed, by the year 2050 nine out of ten adults and two-thirds of children will be overweight or obese.

Ever Rising Costs Of Obesity

So, what’s the cost to the UK economy of this epidemic? In 2009/10 there were around 10,500 people of all ages admitted to hospital diagnosed with obesity or suffering health problems directly connected to obesity, and the cost to the NHS of treating the overweight and obese is currently around £6.5 billion, an increase of around £2 billion since 2008.

With the increase in type-2 diabetes, mainly caused through rising obesity, a further six hundred million pounds was spent on treating diabetes, and this figure doesn’t include treating various complications caused as a result of diabetes.

In the US the figures are even more disturbing. The most recent figures available show there are currently 25 million cases of of people with type-2 diabetes, 27 million cases of serious and chronic heart disease, not to mention around another 100 million suffering either hypertension or arthritis and around 800,000 incidents of people suffering strokes.

There is deep concern among health officials that if this upward trend continues, by 2020 it will increase ten-fold the number of cases of coronary heart disease, type-2 diabetes, stokes and arthritis.

Is it any wonder the US is labeled the “Fat Capital Of The World” with the state of Mississippi leading the way with around 35% of its residents being overweight or obese (2011 figures).

The UK isn’t much better with the unenviable tag of the “Fat Capital Of Europe”, Scotland leading the UK statistics with 64.3% of its population being overweight, 27.1% of which were classed as being obese (2012 figures).

Once again, if these projected figures for 2030 are allowed to increase annually, it is highly likely, maybe inevitable, that by the middle of this century, treating obesity and its related diseases will become unsustainable in both the UK and US.

Can we avoid becoming obese? Yes, we can with a little attention to our

diet and lifestyle, particularly with our children. See Post: Choosing The Right Diet To Avoid Obesity.

Many countries, where obesity was not a problem, are now finding increasing numbers of its citizens suffering from obesity and rising cases of cardiovascular disease.

Is this due to the rising number of fast and junk food outlets across the globe, and the increase in supermarkets pushing ready meals and convenience foods high in sugars, hydrogenated and saturated fats? Or is it just a coincidence?

U.S. Department of Health and Human Services:
Health Risks of Being Overweight