Can Exercise Be Harmful?

One of the least talked about facts or questions asked when discussing exercise is: “Can It Be Harmful?” Yes, it can! Like 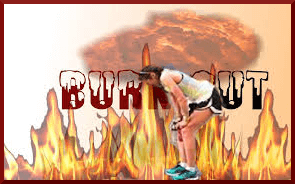 everything else taken to excess, over-indulging can very often be more harmful than too little and lead to burn-out.

This is very often the case with many who are just starting on a weight loss program that incorporates a fitness program, they want too much too soon and start over-indulging, exercising to the point where it becomes an obsession and, eventually, an addiction to chemicals in your body called endorphins which are released by your brain when you exercise.

When exercising sensibly, these endorphins give you a sense of well-being and contentment but excessive amounts, caused by over-indulging, give a feeling of euphoria, “runners-high” as it is also called, but, as with any addiction, there’s a price to pay.

Once this feeling of euphoria starts to diminish and the “come down” sets in, as with any addict, be it drug user, smoker or alcoholic, you experience withdrawal symptoms, feel irritable and out of sorts and can’t wait for your next “fix”, and so you go on exercising, never stopping to listen to what you body is saying. And what it’s saying is, “Stop.”

The reason exercise addicts keep pushing themselves probably lies in what happens when they don’t work out. Psychologists at the University of Massachusetts at Boston studied the psychological consequences of being unable to exercise.

They compared thirty male and female runners who had been laid low by minor injuries for at least two weeks, with a similar group who continued to run.

Those who could not run displayed more signs of depression, anxiety and confusion, and they were far less happy with themselves and their bodies. Like other addictions, over-indulging in exercise, they say, appears to have withdrawal symptoms when they can’t exercise.

The body has its limitations and if you push it beyond that limit, you will harm yourself. So how do you know if you are exercising to excess? Your body will tell you!

Constant feeling of exhaustion, leading to a build up of fatigue after exercise, are the early warning signs.

Stop right now and review your exercise routine before it becomes an obsession and leads to addiction!

Exercise, when done correctly, will do what it’s supposed to do, give you a fit and healthy body, but taken to excess it can be responsible for many serious health problems.

Not only will it harm the mind, but muscle damage; ligament damage; osteoarthritis, which is irreversible; and heart problems are all long-term problems related to over-indulging, and can lead to irreparable harm to the body. And they’re all waiting to make your life as miserable as possible!

There is another problem that can arise from excessive exercise that may not be noticeable: The production of free radicals. These can lead to serious health problems and speed up the aging process. Free Radicals

Although obsessive exercise tends to happen mostly among new exercisers, many athletes push themselves to the limit, causing injuries such as stress fractures, developing shin splints and other bone-related problems, leading to possible permanent damage, and all because they don’t listen to what their body is telling them and refuse to rest.

First of all a good exercise program should be varied so that it tones all your body, not just certain parts. You should have enough exercises in your program to rest some parts of your body while exercising others.

One of the things that most obsessive exercisers don’t do is combine different types of workout and tend to do the same exercises day after day.

For example, walking, jogging and running are all natural instincts and are included in many weight loss programs because they are an excellent way to lose weight, but too much walking or jogging can lead to osteoarthritis. A lot of patients who walk or jog up to an hour everyday come up with complaints of aches in the knees.

Did you know that when you’re walking, you are, unconsciously, trying to defy gravity? But atmospheric pressure (14.7 pounds per square inch) pushing down on you forces your feet back to the ground.

Along with jogging, over-indulging in walking, rather than exercising your muscles, can lead to permanent damage to ankle and knee joints.

Another problem some obsessive exercisers overdo, especially when building up their “six pack” are sit-ups. More than ten a day can weaken the spine and shouldn’t be used every day of the week. Moderation, as with everything, is the key.

As previously stated, slow and safe is the way to go, gradually building up to you fitness levels and a healthier you. Never work out so much that you feel completely exhausted at the end of it. Four to five days a week for about forty-five minutes to an hour each day, varying your chosen exercises daily.

As your fitness builds up you can increase the level of exercises as long as they leave you feeling fresh and energetic and not exhausted. Nevertheless, regardless of your level of fitness, at least one day in the week should be left free of exercise to allow your body to relax and recuperate.