If your doctor advises it and you are accepted for surgery, a decision to accept the surgery should not be taken lightly. Don’t believe surgery is a magic wand and the cure all of your obesity.

A complete change of lifestyle isn’t an option, it’s a necessity. Committing yourself to the before and after program devised for you by the bariatric surgery team is essential if the surgery is to be successful in the long term.

There are various types of bariatric surgery that can be performed. This will depend on how the surgeons assess your suitability and decide which is best for you. Now let’s take a look at what the different types of surgery are.

Also known as Lap Band Surgery, an inflatable band is placed around the top of the stomach, creating a small stomach pouch, the opening of 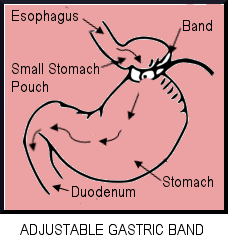 which can be reduced gradually to restrict the amount of food consumed by the recipient.

This is done by placing a port just under the skin, by which the addition or removal of saline can be controlled.

This, in turn, satisfies the recipient’s feeling of hunger quicker and reduces the number of calories consumed, a major factor in weight loss.

Once the food has passed from the small stomach pouch into the stomach below the pouch, it is digested as normal.

Like every form of weight loss surgery, gastric banding can have side effects, the most common being vomiting, caused by eating too much food too quickly.

As with all forms of bariatric surgery, gastric banding has its advantages and disadvantages. Some are listed below:

After the surgery it is of the utmost importance that post-operative diet and post-operative appointments are strictly adhered to if it is to be successful in the long term.

That’s about it for the Adjustable Gastric Band, now let’s take a look at Vertical Banded Gastroplasty.

Also known as “Stomach Stapling”, the amount of weight lost is less than with other weight loss surgeries, and is not performed as much as it used to be. 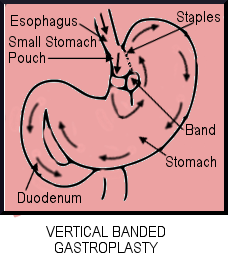 the passage of the food. This is achieved by creating a small stomach pouch using staples and a band made of special material.

Where the esophagus enters the stomach, using staples, the stomach is stapled off, creating a small stomach pouch, which restricts the amount of food that can be eaten at any one time, and makes the patient feel fuller more quickly.

A band is then placed at the bottom of the small pouch, creating a hole about one centimeter, which allows the food to slowly enter the main stomach and into the gastrointestinal tract to be digested as normal. This does not affect malabsorption and calories and nutrients will still be absorbed from the food eaten.

As with every type of bariatric surgery, vertical banded gastro-plasty has its advantages and disadvantages. Below are some of them.

That covers banded surgery, now we’ll take a look at gastric bypass surgery and what is available.

The most common form of gastric bypass surgery to help weight loss is probably the Roux-en-Y (RNY) method. As well as stapling it involves

In the last ten years, of all the types of bariatric surgery types tested, the gastric bypass is seen as the most effective in the amount of weight lost, both short and long term, has relatively low instances of compli­cations while gradually improving or eliminating many obesity health-related problems.

As with the two previous examples, a small stomach pouch is created by cutting and stapling both sides of the separated stomach where the incision has been made.

Like all weight loss surgery, the gastric bypass can have side effects, the most common being known as the “Dumping Syndrome”, which has both early and late side effects. Let’s take a look at the early dumping syndrome first.

Some of the symptoms of early dumping syndrome, which normally occur within thirty minutes after eating a meal, and can last around an hour, are as follows:

Many of these symptoms may be alleviated by following a few recommended simple aftercare dietary rules: Don’t eat your food too hot or too cold; don’t drink fluids thirty minutes before, during, or until at least thirty minutes after a meal; avoid foods that are high in fat and carbohydrates, particularly simple carbs, which are sugars.

The RNY Gastric Bypass has more advantages than disadvantages, below are some of them:

The contents of this article is for information only and not meant to advise or recommend bariatric surgery. If you feel surgery may benefit you, please consult your medical practitioner who, after consultation, may refer you to bariatric surgery specialists for assessment as to your suitability for surgery.